Brinjal, baingan.. or begun is called the king of the vegetables.

When I was revealed this information, I was gob smacked. How can a vegetable called Begun – Be which for me means “NO” and Gun which means “QUALITIES”. So a vegetable with no qualities is called the king of vegetables? Just because it has a beautiful green crown! Well what can I say?

I never like brinjal as a child and I often wondered why my parents got so excited and fussed over the thought of having bharli vangi (stuffed brinjal) with bhakri (bread). And after having it, they would feel nostalgic and remember my maushi (moms sister) who would make it the best and call her up talk about the meal. I could never understand all the fuss over this vegetable until ……..

One day, we were traveling from Mumbai to Tuljapur. Our visit to our deity with little Yug was pending so the whole family decided to take the trip and we left by road in the evening heading to Pune where we were planning to break our journey and the next morning leave for Solapur. The journey was very long, but amazingly picturesque with the sugarcane fields, and one could see bullock carts filled with sugarcane lined up, with their produce traveling to the nearby sugar factories to sell it.

On our way we passed through many villages, and one could only imagine how simple a life they would be leading. The women folk bundling up their little ones in their arms and balancing the basket of food on their head, heading to the farm to work, children, some shabbily dressed walking to school, made me crave for this simplicity they dwelled in.

But one thing that caught my attention every time was some of the men wearing a simple cotton dhoti and bandi which looked quiet worn out and beige in colour which must have been super white at some point when it was bought. They had bright colored turbans on their head. The magenta pink ones caught my attention the most. A strong wooden stick in one of their hands which had a bunch of bells attached to it, maybe used to drive the cattle and sheep back home after grazing them and a bidi (Tobacco leaf cigarette) in the other. And the extra bidi simply tucked away behind the ear. What I observed was mostly the older men would do the job of grazing the animals, probably because they didn’t have anything else to do as farming is difficult at that age. Though we were traveling in air – conditioned cars I’m sure it must have been scorching hot outside. It was truly an amazing drive and I didn’t even realize it was lunch time.

We stopped by a small khanaval (eatery), which said in Marathi home style, meals available here. The place looked rustic but clean. On seeing us the owner came forward introduced himself and guided us to a table in one of the coolest part of his eatery.

He ordered the waiter to take away the shining steel water jugs and replace that with bottled water almost assuming that we city people cant digest well water.

He didn’t have a printed menu for us to go through but in a superfast speed he muttered the five dishes he offered which were mostly with mutton and chicken. At the end of his speech my mom in law asked him if he served any vegetarian food as well. He looked quiet lost and blank at this question and scuttled off to the kitchen to see if there was anything vegetarian.

He had gone off for more than 10 minutes and then came back with a smile saying he didn’t have anything veg to serve that day but his wife has cooked some bharli vangi (stuffed brinjal) at home and he was happy to serve that to us. Since his house was right behind the khanaval, in fact they shared a common wall, I’m sure it was easy for him to get that. On hearing vangi I was a bit disappointed but I didn’t have any choice. The rest of the family was eagerly waiting for their order of sukha mutton, rassa and bhakri. After waiting for almost 45 minutes, we were getting slightly impatient. And after asking why the food is taking so long, clean steel thalis and vatis were placed on the table, followed by trays of food, which was ordered.

The mutton curries looked amazing and when the bharli vangi arrived it looked perfectly spicy and delicious too. But to be on the safer side not to waste food I took a small helping of it and half a bhakri. Just then one of the waiters came in with a plate of onions and took each one of them and smashed them with his fist and table sprinkled some chilli powder and drizzled lemon juice on it and served us a whole onion each. On asking why did he not slice the onions rather than smashing them the owner enlightened me by saying if you punch the onion it breaks up the internal membranes and releases a lot of oil in the onion, making the flavor more intense. Which is why most farmers who have a simple meal of bhakri and chutney punch a fresh onion from the field and make their meals flavorful.

On that note I broke the bhakri and dunked it in the bharli vangi and ate it…. And oh my god.. it was divine. I ate my meal like a glutton that afternoon and the bhakri not being enough, I polished off a small portion of the local rice he had served which was naturally sweetish to taste.

After feeling totally satiated with the meal I truly felt I was in a food coma…And since then I understand the nostalgic feeling and I too fuss about a bharli vangi and bhakri today. 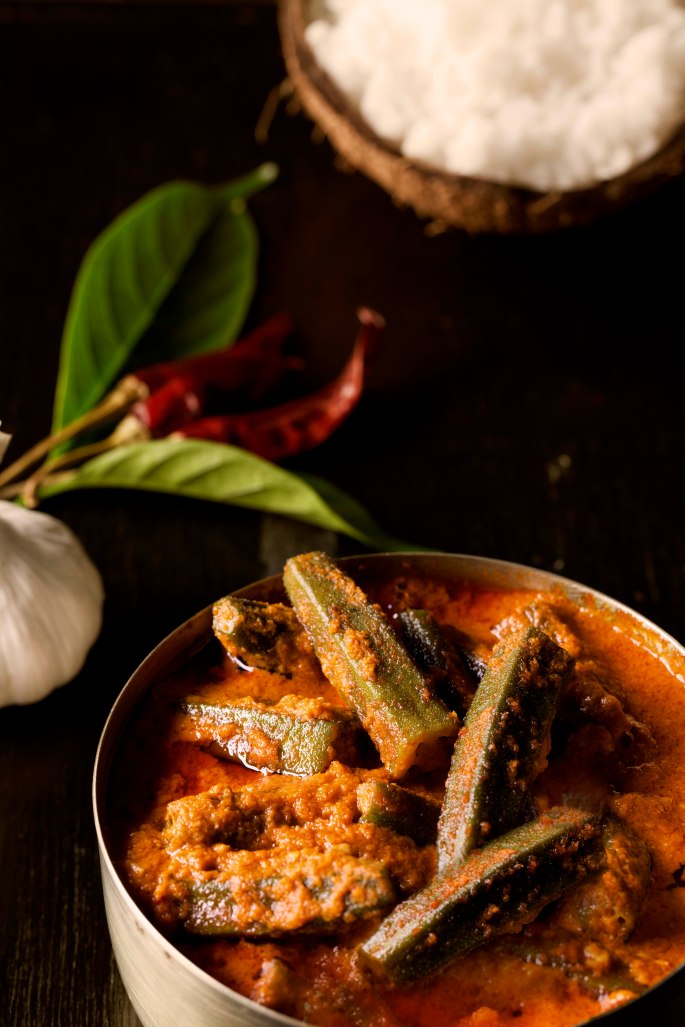 In Marathi amti means a curry and there are a variety of amti’s that we cook. Mashyachi amti (fish curry), channyachi amti (chick pea curry), dalichi amti (flavored and tempered toor dal), and sometimes amti’s are made using vegetables as well.

Usually the amti made with the toor dals is sweet, sour and spicy to taste. While amti’s made with lentil, fish or vegetables, is mildly spiced with a base of coconut gravy and is flavorful.

It is said that the sambar was invented in the quest to make an amti.

So in the year 1673 a fierce battle was imminent in Tanjore as the ruler od Madhurai had decided to capture Tanjore.The courtiers of Tanjore decided to seek help from the Marathas and sent a secret message to Shivaji’s brother Venkoji who decided to be a part of the war himself and marched to Tanjore with his army.

The Maratha army bought their food and taste along with them and after the war Venkoji was so much in love with Tanjore that he decided to settle there.

There are a few stories as to how the Sambar originated. So the sambar that’s an integral part of the South Indian cuisine was created by the Maratha’s.

Sambhaji the son of Shivaji came to Tanjore to visit his uncle and since Sambhaji loved amti, a dish similar to it was prepared and was named Sambar in his honour.

According to another story, Sambhaji was a food lover and he loved to cook as well. he once wanted to make the amti and while preparing it he realized there was no kokum which is a very typical Maharashtrian ingredient used in making amtis and on an advice of a cook he used tamarind which enhanced the flavor of the amti and hence it was called sambar.

Today for dinner I have made 2 varied amti’s one with toor dal and the other with bhindi.

Both the recipes are rather simple and yet very unique and delicious.

½  a raw mango chopped into 1” pieces

A pinch of asafetida

Once the dal is cooked add the chillies, sugar, ginger, raw mango, turmeric and salt and boil for 5 minutes on a medium flame.

Add the coconut and coriander and boil for 2 minutes and shut the flame.

Heat the ghee and oil and splutter the mustard seeds and cumin seeds. Then add the curry leaves and the crushed garlic and let the garlic turn golden and then add this to the dal and your amti is ready.

Tamarind to the size of ½ a lemon

Heat 2 tbsp of the coconut oil and sauté this paste till the color darkens slightly and the moisture is reduced.

Then add the chopped okra and sauté further for 2 minutes and then add 3 cups of water and make a nice gravy. Add salt and boil till the okra is done.

Heat the remaining oil and crush the remaining garlic and add to the oil and fry till its nice and golden and add it to the curry.

The weather has been really hot these days and with the temperature rising by the hour all I can think is of simple food and lots of cold water to drink.

As usual Sarita my cook came and asked me in the morning what would I like to eat for lunch and I thought what could be better than the humble Varan Bhaat (dal and rice) for lunch today.

So basically Varan is a dal made by simply boiling Toor dal (pigeon peas) along with some turmeric powder and asafetida, the cooked dal is mashed, some cumin seed powder, jaggery and salt is added and then the dal is further boiled till it’s nice and thick. This humble varan tastes best when eaten along with hot steamed ambe mohar rice (a variety of rice that grows in Maharashtra which literally means mango blossom as it has a strong aroma reminiscent of mango blossoms) and a dollop of home made tup (ghee)

So the varan is a vegan preparation which is a typically from the Maharashtrian or Goan cuisine which is served on all occasions.

In most Maharashtrian homes varan, bhaat is served as the first course followed by chapatti and vegetables.

Most Maharashtrians even today have this at breakfast. I would always find it very unusual till I realized we also have Idli, sambar and chutney for breakfast using the same ingredients.

Long ago I had heard a story of a women who on her death bed told her sister in law that after she dies her son should be fed nothing more than varan, bhaat twice in a day as she was aware of the sister in law ill treating the son after her death. The mean aunt was more than happy to fed the mother less soul remains of varan, bhaat along with some ghee and lemon wedge. The boy in turn grew up to be healthy and strong, as his aunt was not aware of the goodness of this simple meal, unlike the mother.

So today its Varan, bhaat, tup and limbu for me!